Ok, so a lot of you may wonder:

It is true that ending themes can be trivial to certain shows, especially if the show’s opening theme is much more likeable and relevant.  We usually skip ending themes because they’re usually just re-hashed  arbitrary music sung by some Japanese boy band placed at the end of each episode just to complete those last 1:30 minutes of the episode.  It’s just empty fodder, right?

However, that’s not always the case, for there are a multitude of ED themes out there that define/contrast its respective anime nicely, cap off an episode in a distinct and memorable way, provide some breathing room after an intense episode, and display what the anime is all about through the song and the animation, among many other things.

And sometimes, very rarely, an ending theme comes along that is soooooo good, that it becomes the very embodiment of the show it represents.

What’s up everyone, my name is Ken, also known as Prince Kouhii from thebutonsmasers.com, and today I present to you the Top 25 Anime Ending Themes that hold a special place in my heart.  At least, the 1st version of it.

A little bit of a disclaimer before I let you guys run off into the wild yonder:  THIS IS MY LIST AND NOT YOURS.  If you guys want to express your opposition to ANYTHING I’ve placed on this list, then please do so in the comments below and do so respectfully.  Also, I should probably tell you guys that these are my personal preferences and not everything will be based off aesthetics, although aesthetics is a factor in my ranking.

Are we all good?

Alrighty then, without further ado, let’s allons-y into the 1st version of my Top Ending Themes, and hopefully you find your favorites here somewhere.

A song that otakus everywhere remember, not because of the anime it is attached to, but rather because of the countless hours that they spent trying to conquer this song on Osu on the highest difficulty level, Nippon Egao Hyakkei is one of those ED themes that really define FUN:  a really catchy song coupled with a cute art-style and an infectious dance makes for an amusing ending theme for an anime such as Joshiraku.

Oh yes, the fangirling is strong in this one.

With its unique art style that is reminiscent of classic shojou manga covers and its upbeat melody, Sprint matches the happy, mellow tone of the show to a T.  It was always a thrill having to listen to the first few acoustics of the song at the end of every episode, and then transitioning into rather fast-paced rifts that always got my heart pumping every time it happens.  Personally, I am quite the fan of transitions like that, as it is a bittersweet indicator of the end of an enjoyable episode.

Also, we are not talking about Vic Mignogna singing this ED in the dub.  As much as I like the guy.

The marquee ending theme for Toradora, Vanilla Salt was an ending theme that was one of the first things that popped to my mind while pondering on what ending themes could I possibly group together in a list.  It’s almost impossible to not associate the show to this ED theme just because of how accurately it defines the show:  it is a happy cheery sun-shiny ending song that melds quite well with a show such as Toradora.

I had a bit of trouble deciding which of the two ending themes for Haikyuu would go on this spot.  Both were upbeat and energetic and they just fit the show so well, that coming to an ultimate decision was a challenge.  In the end, to make it short, I had to go with Leo, because Kageyama.

And also the first few rifts of the song, of course.

Yeah call me unfair and a complete Kageyama fanboy, but whatever.

Before drafting this list, I did not really heed too much attention to this particular ending theme.  Eventually, however, after repeated viewings (since Tokyo Ghoul Root A was airing at the time), it kinda grew on me and I could see how many people like this ending.  To be honest, even now, I’m not quite sure what made me include this in the first place.  In hindsight, there isn’t really anything too special about this ED:  just static images played over a song.  However, one important factor that led to my eventually adding of this song to this list is how the images themselves change every single episode, representing something in connection to what the episode was about, and that appealed to me.  Add that to the fact that the music itself was pretty good and this ED was able to earn its way on my list.

Most top ending lists probably wouldn’t be complete without this song somewhere, and you guys probably saw this one coming.  Not only does the ending encapsulate everything that Angel Beats is, being a light-hearted, calming melody with pretty animation and warm colors, but the way that it reflected the final scene of the show was just magical in its own right, if nothing else.  Granted, for the most part, the ending was just an almost-static image being panned outwardly with all the characters slowly materializing, but the song itself saves it from being totally skippable by being so darn beautiful and serene, and for that alone, the ending definitely deserves this spot. 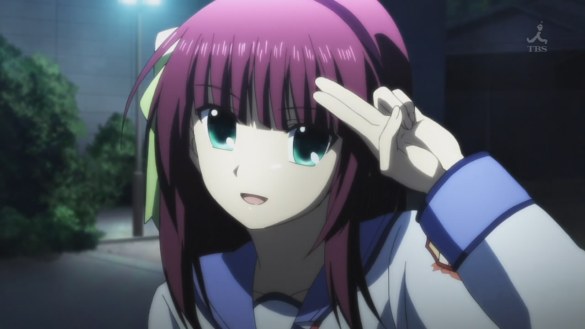 Well, that’s it for now.  Hopefully I haven’t disappointed MOST of you guys just yet.  Feel free to comment your thoughts on this article, and I will have the next part up in about a day or two, depending on how fast I could finish the list.

Until then, this has been Ken, for thebuttonsmashers.com, and I’ll see you guys in the future.